The Case For Focusing On Multiple Goals At Once - Legally Bold

The Case For Focusing On Multiple Goals At Once 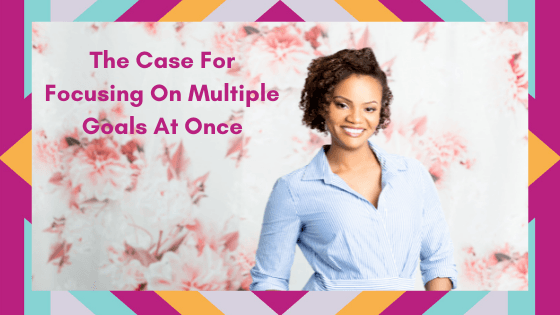 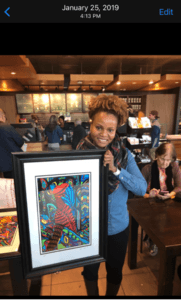 I had gone there to meet up with Andrea Noel (@anoelcreates) there and she gifted me the amazing piece of art that I’m holding as a thank you for my coaching help.

I remember this meeting vividly because that was the day that my coaching focus began to shift.

By 2019, both Andrea and I had experiences with coaching that changed our lives and businesses. At the same time, we recognized where the industry failed to meet the needs of women like us.

That day, we talked about what it might look like to create a coaching program that centered us. What would it feel like? How would it be structured?  Then Andrea suggested that I create it. Though I was reluctant, in that moment, I knew I wanted to create a coaching business like that too.

The only problem was that I had just started Legally Bold…7 months ago.

I loved coaching lawyers through Legally Bold and wanted to continue. I wanted to make the business a success. It’s just that I also wanted to start taking actions around this new idea too. Deep down I wanted to do both, but all the coaching advice out there said I needed to focus on one thing. I listened. I chose Legally Bold and put my other idea on the backburner.

Two Things Can Be True

In our culture, different choices are positioned in opposition to one another even if they shouldn’t be. We learn early on that the key to success is focus. You must focus on your schoolwork, your chosen sport, your career, your life partner, etc. We’re told that the goal in all of this focusing is to eliminate all distractions. If we do that well enough, we’ll be successful.

We routinely have to hold space for two seemingly contradictory things at the same time. We want our work and personal lives to be balanced. We seek peace and justice. We plan for the future and practice remaining present.

Holding on to contradictory goals is part and parcel of the human experience. So learning to hold on to multiple goals well instead of whittling them down to one seems like a much better use of our time.

Permission To Think and Dream

Another benefit of holding on to multiple goals is that you give yourself permission to think and dream.

When we eliminate all distractions in service of one idea, we never create space in our lives to dream about something else. We don’t consider whether a goal makes sense for our lives anymore. Even though our circumstances, desires, and needs change, our single-minded focus stops us from making the necessary changes to our goals to meet those changes.

Life isn’t static, and if we give ourselves permission to hold on to multiple goals, we won’t live statically either.

Some Goals Are Meant For You

In her book Big Magic: Creative Living Beyond Fear, Elizabeth Gilbert explains that, like humans, animals, and bacteria, ideas live on this planet and are swirling around us all the time. When we “get an idea,” one of those swirling thought-forms has simply landed on us. Once it falls, we can either say yes or no to that idea. If we choose the former, then we must commit to seeing the idea through to the end, or it will leave us and attach itself to someone else.

We all have had the experience of having a great idea, doing nothing about it, and then later seeing someone else turn that idea into a huge success. While every idea isn’t for you, if you stumble across one that feels like it meant for you, you must commit. Even if that commitment means you end your singular focus on another goal.

Great ideas are valuable, and we shouldn’t squander them simply because our focus says we should do something else.

This brings me back to Starbucks in 2019. Though I believed I had put that idea on the back burner that day. It never really left me. In fact, my desire to widen the lens of my coaching focus only grew.

Soon enough I decided to turn that desire into action. Those actions have led me to create my new coaching home – Woke Up Worthy. I’ll be talking more about this in the coming weeks.

Until then, just remember that two things can be true at once.

Previous Post What Happens After The Great Resignation? Next Post How To Find A Job That Doesn’t Suck in 2022 – Black Women Edition